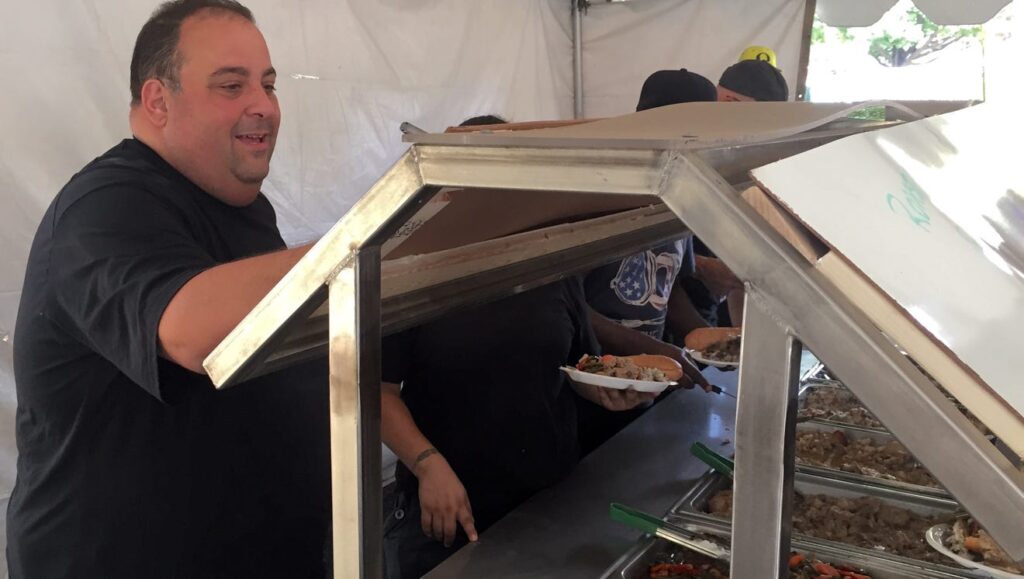 Seeing the Pope was exciting, no doubt about it, but the second most thrilling part of Rocco Gallelli’s weekend was having his own police-escorted motorcade through the streets of Philadelphia to pick up pastries, and being cheered by the throngs of people lining the Benjamin Franklin Parkway.

Gallelli, along with Steve Mastero, manages Innovative Catering Concepts, a catering company with locations in Philadelphia and Williamstown.

ICC found out they had been awarded the contract to cater for the Festival of Families and Papal visit on Sept. 1 and set up shop two weeks later.

Since then, Gallelli estimates they have served 10,000 meals just to workers. They also provided food for the hospitality and VIP tents.

“We had everyone from the Pope to Jesse Jackson,” said Gene Blum, who headed up the backstage catering team over the weekend.

“It was an absolute honor and privilege,” Gallelli said. “We were extremely excited about it … but logistically we had a lot to put together.”

The rapid set-up included a 40-by-100 foot cooking tent and an 8,000 square-foot meal tent where workers and staff for the Festival of Families and the Papal Mass had their meals.

To prepare those meals, ICC rented equipment from as far away as New York. They rented a tractor-trailer with refrigeration and freezer capacity, “just to maintain the food we had to buy,” Mastero said, and then had another whole tractor trailer’s worth of food delivered every day.

Planning meals on this scale was a delicate process.

“You have to keep it simple, because we’re out here in the field kitchen,” Mastero said, but “you try to keep it different.”

There were always three protein options, including a vegetarian offering, and there was lots of pasta. The menu even changed with the weather, with lighter meals on warm days, and cozier recipes like meatloaf on chilly days.

ICC is no stranger to big events, though this was well beyond their previous experience. The company also catered the Made in America concert over Labor Day Weekend, as well as several small parties during their time camped out behind the Rocky statue at the Art Museum for the festival.

They have a busy October planned, so there are no breaks on the horizon.

But the payoff was well worth it.

They met – and fed – all of the stars who performed at the concert at the Festival of Families on Saturday. They didn’t meet the Pope, though Mastero saw him when he was going to the stage. “I gave him a wave and he waved back to me,” he said.

In an effort to fulfill this request, Old City Coffee lent the team one of their large espresso machines, but due to the size, it ended up in the hospitality tent, where Blum figures it made about 400 cappuccinos.

“It was probably the most popular item of the weekend,” Blum said, though he doesn’t think Bocelli ever got one of them.

No matter. Bocelli still asked Innovative Catering Concepts to cater his December 12 concert at the Wells Fargo Center and invited them to the concert as his guests.

All of the stars were kind and gracious, according to the team.

“The Fray was thanking us left and right for everything,” Blum said.

The family of comedian Jim Gaffigan provided the ICC team with several anecdotes from the weekend.

“We had these soft pretzels in the shape of crosses, and (Jim Gaffigan’s daughter) picked it up and said, “Look, mommy, God bread,” Blum said.

Later, when the night turned chilly, the Gaffigan children borrowed Gallelli’s sport coat and wrapped themselves in it to stay warm during the performances.

“We went above and beyond in what we were doing,” Blum said.

The staff tent is decorated with lights and live plants. The hospitality and VIP tents had all china, glass, and silver place settings, rented from South Jersey Party Rentals in Pennsauken.

“The thing we’re most proud of is we’re able to feed the labor and staff that put this great event together,” Gallelli said.

Mastero emphasized the workers often only had 20 to 30 minutes to eat, and the meals might have to hold them for hours. “Many of these guys didn’t go home for days at a time,” Mastero said.

Anthony Yetko works for A Royal Flush, which provided the many portable restrooms for the weekend. He ate an average of two meals per day at the ICC tent.

“The food was great,” Yetko said. “We never went hungry, that’s for sure.”

Gallelli and Mastero also enjoyed the rare chance to see the event infrastructure be built and disassembled from a close distance.

“It was something, to be here seeing all of this construction go up before your eyes,” Mastero said, reminiscing about how, before the weekend festivities began, they took a walk to the center of the stage, taking in the sight of the art museum, the expanse of the parkway and the enormity of the event.

And everyone reflected on the generosity they were shown in thanks for their work. On Sunday, during the mass, one of the ICC staff members asked the Secret Service if she could receive communion.

“One of the Secret Service agents went and got a priest on the side of the stage and brought the priest back to her to give her communion,” Blum said, “then radioed to make sure a priest came back to give communion to the staff.”

Let's get in touch

Give us a call or drop by anytime, we endeavour to answer all enquiries within 24 hours on business days.

Give us a call or fill in the form below and we'll contact you. We endeavor to answer all inquiries within 24 hours on business days.
(856) 740-3352
rocco@icccatering.com